The Journey and the Shabbas Candles

Yesterday’s post generated a comment which mentioned shabbas (Shabbat, Sabbath) candles, and I was suddenly reminded of events from 14 years ago, at the time of Ricki’s birth. And these events are a tiny picture of the journey each mother goes in coming to term with the diagnosis of Down syndrome in their child.
I did not know before giving birth to Ricki that she had Down syndrome. Sure, my mother-in-law had been warning me for years that I was at risk due to age, which I knew myself, but most of the women in my community have kids over age 35, and very few have babies with Down syndrome. And I didn’t do an amniocentesis, because I wouldn’t abort anyway. (So why take the even small risk of miscarriage?). So the first appraisement of our new situation was is the delivery room.
In the delivery room, the doctor told us that they would need to do genetic testing, as there was a possibility of Down syndrome. The illusion that it was only a “Possibility” lasted all of one hour. When I reached the regular maternity ward, I saw the pediatrician, and asked when they would be testing for the “Possibility” of Down syndrome. He answered: “I wish it was only a possibility. There is no real doubt that she has it; she has all the standard indicators of Down syndrome.” As a nurse, I realized that he would never have made such a statement if he was in doubt, and I acknowledged the fact of her diagnosis. But acknowledging and coming to term with it are two very different paths. The first involves the intelligence; the second is an emotional journey.
I gave birth on a Thursday morning, barely after the dawn. On thurday morning, on arrival to the maternity ward, a bed was found for me despite the floor being over-full. At least I had the privacy of drapes around the bed. But I am not a very out-wardly emotional person. And my crying was more internal than out.
I was in the hospital for the Sabbath. Our hospital, serving mostly an orthodox Jewish community, has a large maternity ward. In order to prevent fire hazards, all women who wish to light shabbas candles on Friday afternoon do so in the dining room, on a special tray set up there. When I went to light, I lit… and started praying as I do every week, for each of my offspring. Suddenly I could no longer restrain my tears. What do I pray for her? Obviously her heart condition (minor, only PDA) was a priority. But for my other children I pray for success in studies, that they eventually find a good spouse, have healthy kids…
At that time I had very little knowledge of the vast potential of children with Down syndrome. But I knew that her needs were great. From where do I start? What to ask for? I was in tears, and only the hands over my eyes (and luckily, everyone else’s hands over their eyes) gave me scant-very scant and insubstantial- privacy.
A week flew by, and the following Friday afternoon, I “prepared” myself. I was not going to break down crying in from of my kids. I didn’t want them to view Ricki’s birth as a tragedy. So I made sure that I was really 100% ready when I lit candles (no need to straighten my older daughter’s hair, put the tablecloth on the table, etc.). I was ready and able to flee to my room after lighting the candles, to cry there in the privacy of my pillow.
I lit the candles, and ran. On reaching my room I suddenly realized that there was no need. Over the preceding week, hope had entered. I had heard much more about Down syndrome. My daughter who the week before had lain listlessly like (excuse me for saying so, but that is how I had observed and felt)—like a piece of meat--- she had shown my already her vigorous spirit. She fought to turn her head side to side. I was not about to collapse in tears. Yes, there was still pain, there was still doubts and uncertainties… but the journey towards seeing Ricki as an individual human being, and one with potential, had begun. 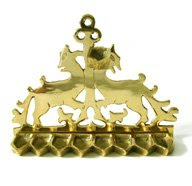 Posted by rickismom at 9:40 AM

RivkA with a capital A said...

Very honest and heartfelt. Thanks for sharing.