Some trhings are simply wrong, no matter WHAT side you are on.....

I have been absolutely floored by two things I heard/read today.
The first incident was when I was discussing the politics of peace in Israel with my brother. I mentioned how I find it hard to believe that we will ever have peace here as long as the Arabs educate their children towards hate and violence.My brother said" You know it goes both ways." I was puzzled by this, and I added that Israeli culture is not like that at all. Our songs , for example, extol peace, not war heroes. He mentioned that he saw an interview with "a settler" who said that it is permissible to kill an Arab child since he will grow up to be a terrorist. I quickly assured my brother that this is CERTAINLY not the standard view of settlers, and that the press had managed to quote a rare extremist.
Than later today I read a comment by someone on another blog, which seemingly praised the killer in Norway because he was pro-Israel. I hope that the writer was simply confused.
First I must say that I am POSITIVE that these attitudes are very rare. But the fact that any Jew would talk this way upsets me very much.

Let us be clear. The Jewish nation is called by G-d to be an example to the world of humanity and G-dliness. We must NOT sink to the level of those who murder us with rockets and terror attacks. Some things are WRONG WRONG WRONG no matter whose side you are on. One of these is killing innocent people. And if we happen to know someone who (G-d forbid) wants to take the law into their own hands, to be an extremist, and hurt innocents, we must do all we can to stop it.
Posted by rickismom at 6:08 AM No comments:

Seems as if it's almost expected.....

I have been reading a few secular books while here in the USA (relatively tame ones), and sometimes watch a bit of TV that my mother has on. One thing which I have noticed is that in almost every story, there is at least one character who has been unfaithfull to their spouse, and in general that reactions are pretty "ho-hum". As if this is almost expected.
All I can say is PWWEEWW!!!!
Posted by rickismom at 2:59 AM 3 comments:

High in the Sky

[image: part of the trail to gem lake] 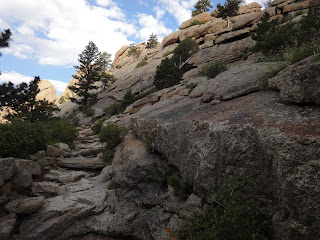 I just want to share a few pictures from the hike I took today to "Gem Lake". Gem Lake is really more of a pond, but the view from the climb up (altitude gain of about 1000 feet) is very nice.
And this hike, BTW, was one which I did NOT do 2 years ago.....

[image: view towards Estes from near Gem Lake] 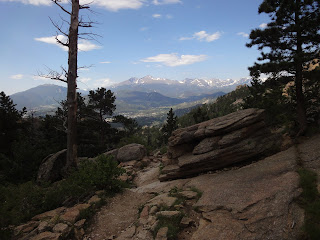 What Can I Say? 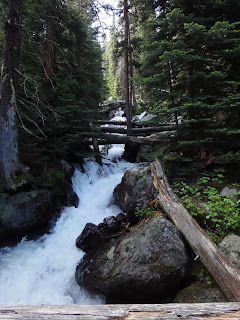 While here in Colorado I have been hiking every day, gradually increasing the length and/or altitude gain each day. I have so far mostly hiked to places which I did two years ago, such as this waterfall, "Calypso Cascades".
But what can I say? As I expected, the hiking has been TREMENDOUSLY easier than 2 or 4 years ago. And today I hiked past Calyso Cascades to the next highest falls (Ouzel), making today's hike a total of 5.4 miles with an elevation gain of 950 feet.
Posted by rickismom at 1:22 AM 4 comments:

I Can Stop Blaming Ricki

Again this summer I have had the opportunity to go visit my mother in Colorado. (Thieves who have figured out who I am can skip going to my house; my husband is home 24/7.)I am enjoying myself tremendously and hopefully will have lots to share. However there is a big difference between this trip and my previous ones: this time Ricki did not join me on the trip, but stayed at home.
One thing that I learned due to her abscence is that I can stop blaming her nudges in my side during the trans-atlantic flights for keeping me awake. I wasn't able to sleep on the flight this time either. I suspect that the excitement of the trip itself is what keeps me awake.....
Posted by rickismom at 11:58 PM 3 comments:

In response to questions about Ricki’s health, she is doing pretty well. She is still a bit weaker than usual, but still can do anything she really wants to.
The last two days she was at a “mini-camp” of two days, which included one night sleep-over. This is not the first time she has done this, and she pranced out the door yesterday with nary a glance behind her.
So why haven’t I been posting? Well, the chief reason is due to my trying to catch up on a whole month’s worth of errands and deep cleaning…….
Hopefully within a week I will be posting more.
Posted by rickismom at 2:18 AM No comments: