[imgage: a poor picture of "Y" in uniform] 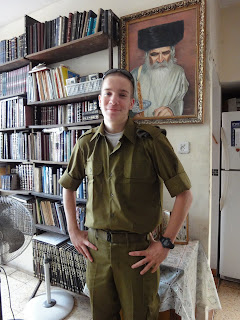 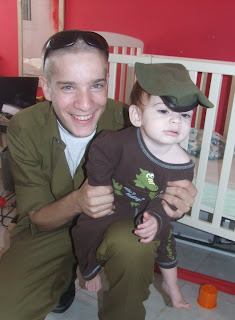 
My son “Y” is back already from the army for a one-day leave. They apparently want to send him to a course, and will be “really” starting with him in a few days. After two VERY BORING days, he was relieved to be sent home. [He will be treated in the meantime like a “jobnik” (desk-worker) inductee, and will only start his combat tour of duty in about half a year.]
When I asked him if he felt like a “pin cushion” (after receiving MANY vaccinations), he laughed and said “Yes!”. Then he added that they had also taken a blood sample for bone-marrow matching.Then he added:
- “But it’s voluntary; not all of the soldiers opted for it.”
- “Why in the world would they refuse?!?”
- “If they are afraid of needles…or, they want one needle stick less….”
- “But we’re talking about the chance to save a LIFE!”
- “Nu, some of them are spoiled little children…..”

So parents, please be sure to inform your soon-to-be-inducted soldiers to be sure to not opt out of this important mitzvah (good deed).

PS to Yesterday's Post:
Yesterday she did NOT throw clothespins when bringing the laundry in. But I suspect that she realized that we were watching.
Posted by rickismom at 3:09 PM

Great picture! Your son and grandson are soo handsome, You should have much nachas from them and all your family.

Thank-you. Yes, I forgot to mention (but Sunny Sacramento fiqured it out), that the child with my son in the picture is my grandson.