THE PROBLEM
After having Falafel for lunch, Ricki and I passed a clock store, and since I needed a watch, we entered. Ricki quickly convinced me to purchase her a timepiece. And then, as almost any teen, but with perhaps a bit less finesse, she started begging me to purchase other items for her, all the while handling them. The seller was thankfully calm, but I kept telling Ricki to return the objects that I had no intention of spending money on. And Ricki DID put the objects back, although slowly and with great reluctance. Like a lot of other 14 year old girls that I have known....
We had to wait in the store a few minutes while the owner put a battery in a watch I was purchasing. Meanwhile a man entered the store. I was in the middle of telling Ricki to put a pair of toy binoculars away. He saw her shrug once or twice, and he walked over, exclaiming “How much are these binoculars?” He then GRABBED them from Ricki’s hands, despite her fierce protestations, looked through them for a moment, then put them on the counter, and walked out.
To tell you the truth, I can take the word “retard”, when not used as a slur. I can even usually take the second glances. But the thing that shows me how far we have to go, are the people who act like Ricki does not even exist. And those who act as if she is incapable of learning. I was so shocked by this man’s behavior that I didn’t even react until he had left. Did he really feel that he would teach her manners by grabbing the binoculars? Probably not-he evidently thought that I was incapable as a mother, and Ricki was not smart enough to learn. Or did he even think at ALL? Did his actions not proclaim as loudly as any scream, that Ricki was not a person in his eyes, she was only “Down syndrome”.
And even platitudes like “These children are so loving...” drive me up the wall. Such statements are simply reducing a child with Down syndrome to an entity called “Down syndrome”, not Ricki, Jane, or Avigail. It is true that some times we may need to make a statement about Down syndrome. I can see myself saying that “statistics show us that about 50% of the people with Down syndrome are born with heart defects”. I tell parents that “researchers have seen that in general, children with Down syndrome are visual rather than auditory learners”. But they are NOT “children like these”. They are not “Down syndrome”. They are individuals. 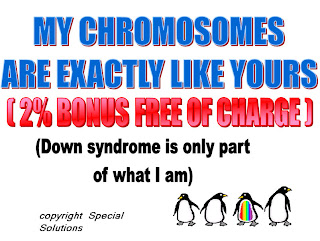 THE CONSEQUENCE
The PROBLEM (with a BIG capital “P”) is that Ricki has adopted their attitude. When she was younger her aid and I worked hard and carefully to give her a good sense of self, Down syndrome, and of its effect on her life. Using stories about people with disabilities, including someone else with Down syndrome, we talked about disability, meeting challenges, and self pride. And we succeeded.... for a while. But about a year and a half ago a group of much younger girls at her school started making fun of her, and calling her names. They were reprimanded, but Ricki, being smart, picked up their message. And Down syndrome became something that she did not want to be. And that, in my mind, is a tragedy.
[I am not talking here about availing oneself of a cure, should one exist. Treating her Down syndrome would not change her intrinsic being or personality, but would simply make her life easier and open opportunities that are currently, for her, sealed with padlock, nuts, and bolts.]
If Ricki is to attain a life of contentment, it can only be achieved if she feels that she is a worthwhile, contributing being on the planet. To internalize that consensus, she needs to receive targeted, appropriate, and true praise for the many things she does. She needs, as much as the “negroes” in the 60’s needed the mindset that “Black is Beautiful”, a feeling that Down syndrome is not a disgrace or that she is an entity to be pitied.
The problem is that as much as I am putting good hard cash into her “self esteem” bank account, she is being robbed and swindled by the man on the street. And, unfortunately, there is no police.......


Blogging Against Disablism Day
Posted by rickismom at 5:00 AM

"Robbed and swindled by the man on the street...."

Very powerful image. And right on the mark!

And I love the picture of that added 2% free of charge. It brought a smile to my face this morning.

You are such a great advocate for changing the percieved notions of Down Syndrome.

No, there is no police. Not out there on the street when you need one anyway, but we are here today, and every day policing for each other. Great post.

Wonderful thoughts well spoken! I have a daughter, age 9, with Down Syndrome. Some of the peer advocates here call it Up syndrome just for the reasons you address. It is hard to know how to offset these kinds of events for our children but I like to think that, because of the good stuff we deposit in their account that they will eventually move past the peer stuff.

Dang, you need a huge audience because what you have said here needs to be heard far and wide.

I worry constantly about my son's self esteem-- he also has a genetic disorder. People will walk up and say things like:

What kind of a message does that send to my child? I can say over and over-- "nothing's WRONG with him," but I won't always be there to intervene. Something has to change.

I will be guardian for my uncle, who has a developmental disability, when my grandparents pass away (before that if needed), and he'll live with us. I find what you write here to be very moving and true. It's terrible when people feel themselves to be any less of a person because of a disability.

I hate when able-bodied people make assumptions (what my BADD blog is about)!

I was in a car dealership with my mom and the salesman spent a half hour telling her how great their vehicles were. When he finally stopped talking, she calmly said, "I'M not the one buying the car." He turned red then started kissing my backside for the sale.

This addresses my biggest fears. We can love our children, build them up, and then in an instant, a stranger can tear it down, and no one is there to stop it, to frown upon it. I pray that the world with change, we and our children can change it, but I must admit, I am skeptical. It is such a big job, and honestly I feel like the rest of the world won't understand until they have walked in our shoes. This is a very powerful post, and I too wish that you could find another venue for your very important words to be heard. As TUC said, you need a huge audience for this one!

Brilliant blog. Sadly we have a long way to go before everyone uses person first terminology and looks beyond the label.

In my role as Director of Down's Heart Group, I frequently speak to peopel and make presentations and I'm always mindful of talking about 'people with Down's Syndrome' not 'Down's Syndrome people' and I hope that it will rub off on some of them, but ti can be very difficult to actual get the message across to some people. And with individuals like this man around, you can see why.

His behaviour was inexcusable and he clearly is the one with a problem. I hope you explained to your daughter that he was a badly behaved person and that this was not the right way for anyone to behave.

Dear Penny (Heart Group),
Yes of course I told her!

harry-er than them all said...

interesting blog. first time here. thanks for linking me.

You know what's funny? The man's behavior struck me as way, way outside social norms, which makes me wonder if he is on the autism spectrum. There's no way to know, of course, but could it be that you are indulging in disablism in your automatic assumption that the man was simply rude? I do that all.the.time, unfortunately. But I'm working on it!