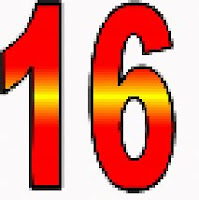 Gleaned from Wikipedia:
Sixteen is the fourth power of two. For this reason, 16 was used in weighing light objects in several cultures. The British used to have 16 ounces in one pound, the Chinese used to have 16 liangs in one jin. In old days, weighing was done with a beam balance to make equal splits. It would be easier to split a heap of grains into sixteen equal parts through successive divisions than to split into ten parts. Chinese Taoists did finger computation on the trigrams and hexagrams by counting the finger tips and joints of the fingers with the tip of the thumb. Each hand can count up to 16 in such manner.

Today is Ricki's (Hebrew date) 16th birthday! Of course, she won’t be joining the armed forces in Britain, nor getting a driving permit. But she IS coming nearer to being an adult.
For weeks lately, she has been claiming to be “21” ,”22”, and once even “31”. (Amazing how we are NEVER satisfied with our age! The young want to be older, and the old, younger……..) Last night we finally prevailed on her that she is 16….

Last year I bought her cosmetics (foot/face cream) which she really doesn't use), not wanting to purchase a ball! This year I bought a grown-up gift that she is more likely to enjoy: Jewelry.
Posted by rickismom at 6:43 AM

At 16 you get an Israeli identity card.

(I hope I spelled the first Hebrew word right. I know no Hebrew except this one. Sorry if I misspelled - please don't be offended - I am an agnostic American, but I try to respect other religions other than Christianity. I don't have too much respect for Christianity due to bad experiences in churches in the past. I've been heavily humiliated AND kicked out of a Southern Baptist church for being bisexual. Homosexual is considered a mortal sin in the Southern Baptist religion - I was raised Lutheran and also partly raised Catholic as well in foster care.)