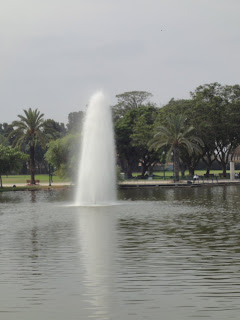 Today I am not giving you any big messages, just a few verbal “snapshots” from my day.
Although it is still sweltering hot and humid here, this morning there was a bit of a breeze, and I felt like walking. And the main reason is because I had a place I wanted to see. On Sunday, I had walked to the farthest extension of the main street next to my house, a 5 kilometer round trip walk. But later I had looked at the map, and I suddenly realized that I had come to within about 4 blocks of the place I had rented when I was a new immigrant here in Israel, some 36 years ago (early winter 1974). I decided on Sunday that within the week I would meander over to “ HaBiluim street” in Ramat Gan (a suburb of Tel Aviv). This morning I had the time, energy, and desire to carry that resolution out.
So armed with TWO bottles of ice water, a hanky to wipe the pouring sweat with, and a bus card just in case I discovered “on the way” that the trip was too hot/exhausting, I embarked. [I also grabbed my cellphone so my husband could phone me when he discovered that I had been missing for too long (in lieu of contacting the police)…… LOL] On reaching the start of “HaBiluim” street, I recognized NOTHING except for a single large building that had existed in that area 36 years ago. The entire area had been built up, modernized, and several parks had been added. (Back in 1974, there were numerous unbuilt lots in the area.) However, on reaching the far end of the street, where I had lived, I discovered that the two-story house still was there, albeit with renovations.
It is strange revisiting a place where you once lived. I felt a connection to the place (even though it had only been a half-year rental), and it brought back several memories.

* * * *
What memories? Here are a few:
1) One morning we awoke to the sound of the mooing of a cow. Amazingly, somehow, a cow had strolled over from somewhere to our front lawn. Mind you, we were living in the middle of the Tel Aviv metropolis, and one building from the freeway…..No, I do NOT know how it got there……
2) How we (I rented together with two other young women) were invited to share a Passover seder with a family in the neighborhood. And when I had tried to buy Challah bread for the shabbas before Passover (which unknown to me at that time, needed to be ordered well in advance, as it was too close to the breadless holiday), the (non-religious) store owner looked at me like I was absolutely crazy, and asked if I really thought that he had no fear of G-d.
3) How I used to walk many Saturday afternoons from our house to the “national park” about twenty minutes away. I remember posing there (on a weekday) for a picture on a rock, pleased at the weight I had lost not too long before. And I purchased nearby my first cream for athelete’s foot…. And that makes me pause and wonder at the capacity of the human brain to remember……
* * * *
(Back to the Present)
Once I had reached Biluim street, I decided to make the extra 15 minute push over to the national park. (Many women from my town ride there to walk on its straight and scenic sidewalks. I doubt that many walk TO the park!) However, on my arrival, I decided that it was too hot to walk on the many unshaded parts of the paths around the park, so after snapping a few photos, I started my return trek to home, hoping that I wouldn’t regret it halfway there. And thankfully, the walk back was actually pretty easy. 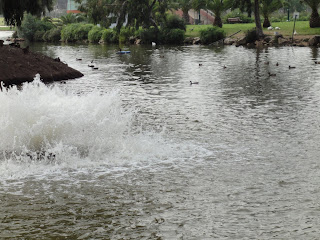 PS Later in the morning I took Ricki shopping for some blouses, and she behaved very well, accepting my more emphatic “no’s”…. However,I also caught her throwing chicken bones from lunch on the floor again this afternoon. She is currently picking them up. SHE doesn't know it, but after I get off the computer, she is going to have a half-hour moratorium from the computer as a punishment.]
Posted by rickismom at 7:05 PM