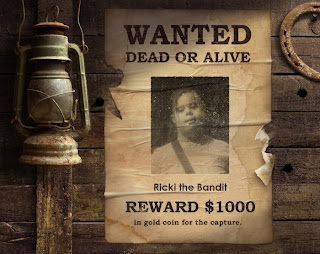 (this photo was done at photofunia)
Those of you familiar with this blog are probably already smiling at my title. And even though I am serious, I don’t blame you.
Sunday, being the day immediately after the week of holidays, Ricki still didn’t have school. So when she got up, I had already been to the grocery store. But she was in a “purchasing” mood. She wrote out a list, and told me that she wanted to go to the store.

Well, I obviously vetoed this shopping spree.
The problem is, that she went out the door anyway.
I yelled a consequence as she was going down.
I phoned the store to ask them to refuse to ring the purchase up.

In the end, she ate borekas there, and received a very large consequence during the day.
She kept begging me to cancel the punishment, but I didn’t. Such Chutzpah I am NOT going to tolerate.....

For more of "31 for 21" (blogging in October for Down syndrome awareness)go HERE
Posted by rickismom at 7:15 PM

I'm curious what you used for a consequence. Do you also have a really hard time with those? I feel like mostly consequences I use are ineffective...

(Again, this is in a group home setting, so its very different, but still, I'd love to hear tips from a pro like you...)

The poster was funny! If you can keep a sense of humour everything in life goes easier.

Blessings from England (en route back to Canada tomorrow)

Love the poster! And I, too, would be interested in the types of consequences you have found to be effective. Thanks!

Well, consequences in a group home setting would depend if you have staff support or not.
A consequence can be anything the person wants/doesn't want, that you can safely and effectively impose. Some are obvious. Writting on the walls brings the natural consequence of having to scrub off what you wrote.
I often use withholding computer time as a consequence, because it is high on her list of priorities. Also not listening to tapes/disc (I confiscate the electric cord...).
If Ricki drinks from the soft drink supply (we only drink on shabbat), she won't get on shabbas (and the whole family cooperates with this).
Other consequences:
-time out
-delay (rather than abolishment) of computer or music
- paying with her money (forsoft drinks, extra soya taken, etc.)
- sometimes if someone in the family is doing something interesting, Ricki is told that she can not participate

DO NOT use basic food items as consequences, nor "writing" assignments!

I also wrack my brains sometimes trying to come up with something. If something is not effective, either change it , or consider POSITIVE behavior support. (Rather than punishing bad behavior, set the person up to succeed and reward good behavior.)
I briefly described the process here:
http://beneaththewings.blogspot.com/2009/09/effecting-lasting-change-in-ourselves.html
[ For those unfamiliar with PBS, I recommend highly the book: Parenting with Positive Behavior Support, published by Brookes
(see:) http://www.brookespublishing.com/store/books/hieneman-8655/index.htm ]

Thank you very much - photofunia is really nice site. Another site like this is Picjoke.com - funny pictures - they make a new effect every day!