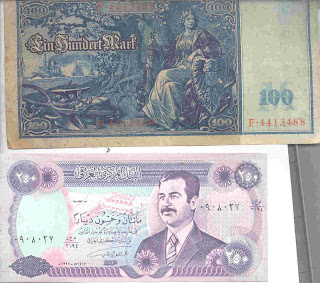 My husband has discovered the perfect gift for our 16 year-old son: paper money. Now, before you envision Ricki’s brother as filling a piggybank, let me explain. We are talking about bills from all over the world, including some older ones. There’s one from eastern Europe commemorating a solar eclipse, a bill from the Weimar Republic (nearly a hundred years old, etc. Out comes the encyclopedia, the atlas, as he gains a bit of knowledge. Then he puts them away in a display book (one bill per page).
In the picture shown here is a picture from Iraq, and above it, the bill from the Weimar republic.
Another one of my sons collected phone cards for years. [Here in Israel, public phones are operated with a card, not cash. (Saves the phone from being damaged by thieves.) ] These cards come out in a tremendous variety of designs, and are very interesting to collect. They even produce them in a variety of languages, as befits such a widely-varied-populace.
In addition, Israel is a stamp collector’s paradise. People immigrated to Israel from all over the world, and receive letters from “back home”. This means that often, without too much effort, one can get stamps from all over the place. For example, in our 6-apartment-sized building, letters arrive from the USA, England, Brazil, and Mexico on a regular basis, as well as occasionally from other assorted locations. In addition, Israel has a nice collection of stamps itself. And, incidentally, several years ago there were 3 stamps printed for “holidays” which were drawn by a young man with Down syndrome.
Posted by rickismom at 10:06 AM

Hi. I keep up with blog posts about collecting for my website, so that's how I found your post. I was at a coin/currency show last month in San Diego and I saw a couple bills from Iraq similar to the one pictured in your post. It's definitely a great hobby, especially for kids who'll get a bit of history and geography out of it as well.

I'm sure Israel is every bit the melting pot that the US is, but in a much smaller space, so I bet you could get a pretty diverse stamp collection going there, like you say.