Ricki really deserves cheers today! Today we went to get her blood tests done. She needs a blood count done before her eye operation, and we rushed to do it this week, so that we would avoid her losing school time for the blood work. (Here school starts only next week.)
So why does Ricki deserve cheers? (And I mean CHEERS!) A bit of history:
Ricki is no dummy, and her memory is quite good. Especially in things that relate to her…. And she has a super-duper memory regarding things that she does not like. Number one on that list is blood tests. Having been the frequent pin cushion for various needles, Ricki developed over the years a sincere dislike for blood tests. “Sincere dislike” translates into absolute refusal to cooperate, even with distractions, explanations in advance, and promises of prizes. Four years ago we had to hold her down physically by force for an urgent test. The two tests since then were better. Both times she was prepared in advance, promised prizes, and we used distraction as well. Nevertheless, she still needed to have her arm held rather forcibly by a second technician. Even though she had promised to cooperate, the second that she saw the needle, she panicked.
So this morning when I mentioned that she had to go for blood tests, she turned to me and said: “I am a big girl. I can do it…..Will it hurt?” She even said that she would go in alone, similar to when we went to the dentist last time. (See post for July 10th). When we arrived at the lab, she indicated that she yes wanted me to join her. And a second technician held her arm, as a precaution.
Ricki was fantastic. She didn’t fight the test. She was marvelous….she was magnificent. She acted like a grown-up.
Later, we went into a store to buy her a drink. There she figured out which coin to use for the purchase, and the change due us. People there where so surprised. “Oh, you’re fantastic”, they said to me. (You know what I mean, that tone of voice used when passersby want to confer sainthood on you for being the mom of a child with special needs.) And I thought to myself… no, this morning, RICKI deserves that title! 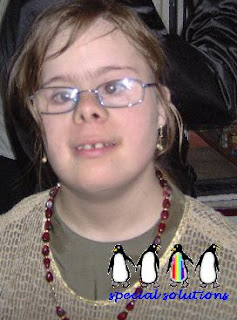 Here Ricki is almost ready for Shabbas (Saturday), just needs to brush her hair still. (She thinks it’s brushed; she’ll have to try again. You can see here a bit of the cross-eye. Sometimes it is worse.

Cheers, Ricki!
A friend of mine had a similar experience with her 14-y/o son with DS. He, too, had a history of terrible resistance to blood draws. This past summer - no problem! She attributed it to him watching a medical tv show named "House".

Thanks for sharing Ricki's photo. I know how a mother feels about hair, but I think she is lovely.

WTG Ricki! That is fantastic! You certainly are grown up! Best wishes with your upcoming surgery and with school!

What a great attitude! I never liked needles either, but the older I got, I just went with it.

Great work Ricki! How brave to face something so scary. My son used to have the same difficulty, he had a horrible fear of needles, but had to have labs drawn all the time. The worst was when he had to have it done and security guards held him down, It was AWFUL, and I swore I'd never let that happen again! He has also gotten better with needles. I'm so happy for you guys!

What a great story. Great Job, Ricki!! I can relate with the blood test thing- my son has fought them too, so I think I understand the joy of a job well done. Thanks for the smile! Best wishes!!!

She looks very sweet and beautiful, even with her hair like that :)