[image: Ricki coloring, without her glasses, and obviously having trouble seeing the page.] 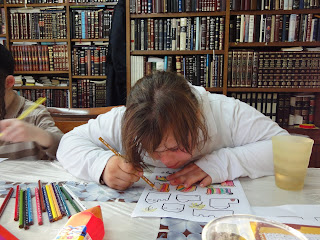 A week and a half ago Ricki lost her eyeglasses again. This is already not “news”, as the new pair we ordered will be the third pair in a two-month period. When she was in school, she was apparently being influenced by a friend but now that Ricki is home on vacation, she readily wears her glasses. (We actually found the second pair after we had ordered the third. The third pair has now been stashed away in my closet for the next “incident”……)
But there’s even something better. I have been making a “campaign” for Ricki to wear her HEARING AID, each day that she wears them earns her the “ultimate” prize (“borekas” potato puff pastry). And the campaign is working; she has been wearing the aid every day, and is even apparently coming to realize that she has been missing out a lot by not wearing them. I am hoping that she becomes acclimated enough to them over vacation that she will REALLY want to wear them. It will take a real leap of courage to send her to school with them. I can not afford 3 sets of hearing aids the way I purchased eyeglasses…….
More of "special Exposure Wednesday" can be found HERE.
Posted by rickismom at 6:04 AM

Email ThisBlogThis!Share to TwitterShare to FacebookShare to Pinterest
Labels: Down syndrome, hearing aid

I found your great site.I like your posting information, gallery and every one..Great job and very clear presentation. Then i will add your great site in my site.Please check it.

If you like our site please add our site from your great site in blog list section.

Great idea about the hearing aid award!! The eyeglasses again??!!! If it wasn't so darn expensive it would be a lil funny-but it's not. There is a website that makes these cute little attachments to put on kids eyeglasses... its like butterflies, flowers, etc. it goes on the side part from the lens portion to the ear. I will look it up for you and get you a link. It may help her to hold onto her glasses!

That is so interesting about the ketchup!!

Dino World at first I thought you were spam! But I went to your site, and saw that you arer part of the "Oz Squad" family I on principle don't have a blog list, as I for sure won't agree with all that others write, and I don't want to appear to do so. Sorry. I am glad you enjoyed my blog, andf thanks for the compliments.

Re: Ketchup:
Anyone wondering what they missed in my post should be informed that "Adoption of Jane" is remarking on a comment I left on her post. For a full evaluation (tongue-in-cheek) about DS and ketchup, see my post (the last third of it):
http://beneaththewings.blogspot.com/2008/07/three-short-pieces-for-friday-and.html

I love her determination to color, even if she can't see the page very well!

I feel your pain about the glasses. Gracie has broken her so many times. I only buy them where I can get a warranty. We have spent close to a thousand dollars on glasses just for Gracie, since we don't have insurance for them.

I would love to see the link that Adoption of Jane has is going to send you!

I was just talking to my son's dentist about options with his very crowded teeth and we decided we couldn't go with anything he has any control over removing at this point!

Maybe you could get her a cute little bag to put her eyeglasses and hearing aids in if she doesn't want to wear them. At least then there might be fewer times that the items need to be replaced. :)

Rickismom, I still was unsure what borekas was so I image-googled borekas and they look a lot like what I like to eat in the USA.

They look similar and does have potatoes in it but it also has cheese. They also make plain potato pierogies as well. I know they're not kosher but I was wondering if I have the right idea about borekas and pierogies.

It sounds like you found the right motivator for her to wear the hearing aid! :) Hopefully she'll keep it up and realize how much more she can hear when back at school too!

Great plan - I'm all for bribery, sorry rewards. We regularly replace glasses so I feel your pain there - but thankfully not hearing aids - they are SO expensive! I hope you have success.

Your strategy works! I think I should apply it to my son. He always removed his hearing aid. I'm worried about the things that can happen to him. Thanks a lot!

How grand that she realized that she was missing out when she started wearing her hearing aids, I mean, that now she might have motivation to wear them! (sorry, that might not have come out in the good way that I meant it)
Have a great weekend!

I grew up wearing a hearing aid - well, wearing it as I left the house, but taking it off the minute I was out of sight. I never lost it, but sure did miss a lot that went on! But I felt self-conscious with it,even though my hair was long and in reality, no one could see it. It wasn't till I was in my 30's that I agreed to be retested, fitted with two (much smaller, due to technological improvements) aids. I now have two yet even smaller ones in my 50's and wear them for work and synagogue and meetings, but they come off the minute I hit the house! They're hot and after a whole day, my ears ache to some degree. Besides, the quiet is nice sometimes!

Glad you found the eyeglasses, hope she does not lose them again. We can only hope she keeps up with the hearing aids, maybe up the bribe, I mean, reward a bit?

I reach your excellent site.I am very impress with your regular posting updates. I like very much your blog.