The Morning After / Special Exposure Wednesday 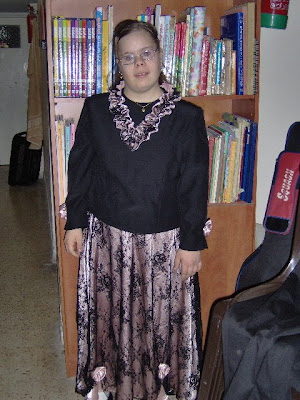 It’s “the morning after” elections, and for us, the morning after the wedding. (Comments on the election in a moment.) Yesterday before leaving for the wedding, I snapped a picture of Ricki in her finery.
The wedding was very lively, and well-planned by my daughter and her groom. Even though it was in a very out-of-the-way place, I was warmed by the number of friends who made the effort to attend.
* * * * *
Although I had my doubts about Obama, specifically due to my doubt that he will be a supporter of Israel, I must say that America can say “We’ve come a long way, baby.”
I remember when we visited Florida as a child, seeing at gas stations three bathrooms:
Men
Women
Colored
(And I remember my parents having us all sit at the "colored" soda counter in the department store.)
The fact that America has elected a non-white president highlights the changes that have come over America in the intervening years (although not ALL of these changes have been for the better.)(When I read that he "is the president of the 'hip-hop' generation", I was NOT enthusiastic.) But America has come a long way.
Posted by rickismom at 8:52 AM

She looks so pretty. Glad everything went to so well.

Ricki looks beautiful. Love the dress/outfit, and her eyes are looking very pretty, too. I enjoyed hearing about the wedding. Congratulations to your family.

beautiful outfit! She looks ready for a party!

Oh, she looks so nice! So glad that everything went well. I share your ambivalence about the election - appreciate the movement forward but concerned about what policies will go into place.