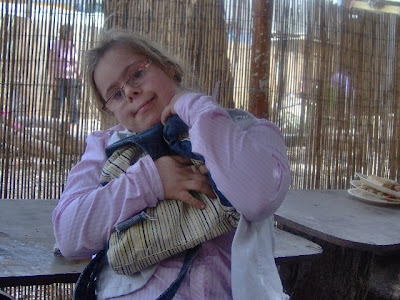 Ricki went on a trip yesterday, along with a friend from her former gradeschool. This young lady does a lot of volunteer work with special-needs children, and whenever there is a trip, she tries to arrange for Ricki to join in the fun.
Ricki took her camera (I can't post the pictures she took, as I am sure that her friend would object to having her photo on the net), and took several pictures (including friends, highways, and close-ups of her nose.....). [I only upload to my computer the normal pictures....] This picture her friend took of Ricki.
When I opened the camera to upload the photos, I discovered that Ricki had managed (somehow....) to change the menu language to Russian. It took me a bit of time to fiqure out where to change it back. If it had been any language with words similar to English, it would have been easier, but Russian, being written in a different alphabet all together, was problamatic. Luckily there were pictures of flags by the language command, so I was able to fiqure it out. [But for once, I realized the frustration that non-English reading Israelis must feel with all the electronic menus in English.....]
Posted by rickismom at 9:25 AM