SOOC Saturday/Sunday -Living on the Brink

[images: a Raven eating a bird carcass in the middle of the street.] 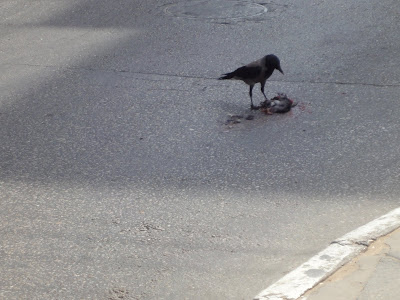 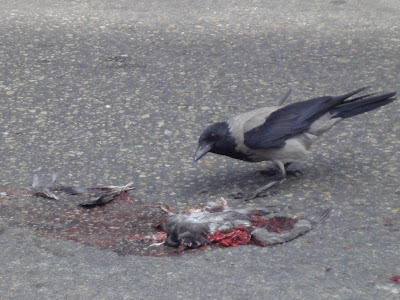 I caught this image while out walking. At first I took from a distance.I noted that every time a car approached, the Raven would fly away at literally the last minute, promptly returning when the "coast was clear". Then I came closer, trying to get a close-up, but the bird was apparently more scared of me than he was of the cars, so he stopped mid-meal. So after several minutes of trying to catch a close-up, I backed off a bit, until he returned.
Now why did I post this gory picture? Not just to have what to post. Oh no. We who are overweight, may think that we are not as stupid as the raven, who is striving to finish his meal on a busy street. He is living "on the brink". And so are we. If we stray from our eating plan, risking our health (and life) for a piece of tasty cake, or some ice cream, are we not also tempting fate?

PS. Can you imagine the stares I got as I was attempting to get this close-up? When the raven was away, it looked like I was simply trying to photograph the carcass.I mean, who in their right mind photographs bird carcasses?????

Find more of SOOC (Straight out of the Camera) HERE.
Posted by rickismom at 12:33 AM

Hehehehehe! I am impressed that you took pictures of it at all...Not so sure I would have the stomach to do it for very long. ;-)

Very observant. Many people would have just ignored that.

Boy how true...great way to tell and make a point. Pictures are sure worth a thousand words!

Wow, powerful post! I also winced at the images, but that's a really good illustration of our tempting fate every time we stray from what we know is good for us. I am just getting back on track with my own health plan; thank you for a powerful visual to go along with this new start! (And thanks also for stopping by my blog!)