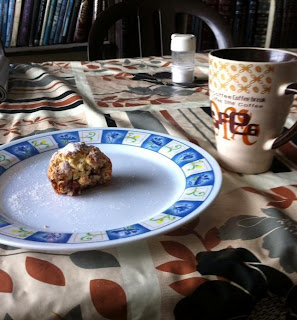 [image: diet doughnut with a cup of coffee.]

Friday morning was the last weekday before Hanukkah, and suddenly I realized that my husband and home-from-the-army-for-the-weekend-soldier-son would undoubtedly be expecting jelly donuts (Israel's typical Hanukkah calorie-bomb) after lighting the menorah Saturday night.
Now I vowed NOT to fry doughnuts myself; they are too tasty (mine are) and way too fattening. But the store ones (mass-produced) are really not that tasty (too sweet). And besides, if I had even one of them, it would cost me royally- to the tune of about 400 calories.

Then I remembered a recipe for "baked" doughnut. I dug it out, halved the recipe (knowing that leftovers would be tempting), and made some. I filled them with no-sugar blueberry jam.

An admission: they don't taste like fried doughnuts. But I had added a bit of brandy extract (NOT brandy, just flavoring), and that, together with the blueberry filling, made them pretty good. Good enough to stave off complaints, and low-calorie enough that I could indulge in one.

Sometimes the best way to diet is to walk around your yetzer hara (evil inclination), rather than hitting it straight on…..

Yeah for you. Cleverly done and satisfying everyone.