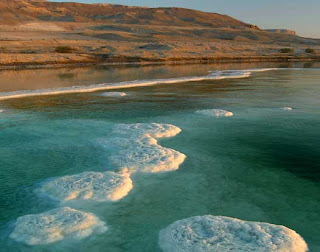 On Thursday Ricki and I had a real treat: we traveled with one of my married sons (and his eldest daughter) for a short swim in the Dead Sea. Now I have SEEN the Dead Sea before, but as luck would have it, had never SWAM there. So I was looking forward to the trip.

Ricki behaved very well on the trip down, taking the long car ride in stride. She even enjoyed all the “incidental teaching” that I managed to fit in as we passed various sites on the way, including an explanation of the airport control tower, and a review of much of her studies on the Negev area (which she had studied in grade school). All was well until we reached the water. I had packed light, and never having been in the Dead Sea, figured that any rock crystals in the water would be smooth, as rocks in lakes tend to be. WHAT A MISTAKE! The walk into the water was VERY painful, but after a ways, I sat on my backside and managed to progress that way out to where the water was deep enough to float. Ricki did the same, but she was protesting VERY VOCALLY all the way. (I asked my son later if he had heard Ricki on the distant “men”’s part of the beach, and he had….) Once out, she grabbed my arm, afraid to try and float on her back (her experiences with floating in the pool are all on her tummy, which she obviously could not do in the Dead Sea’s highly salty water….). Her reaction probably scared her 6-year-old niece, who refused to even try entering the water. After a while we went back to shore. All the other women there (who probably wanted some QUIET!...) pitched in. One loaned us her slippers to walk back over the crystals to the beach, and another tried to calm Ricki down as she noted the two miniscule scratches on her legs from the salt.

Afterwards we ate lunch in a park. I managed to twist my left leg royally there, jumping down a height I should have known better than to attempt. (This has wiped out nearly all walking for me for the last two days.) [At least I redeemed myself with both Ricki and my granddaughter by buying them popsicles.]

Of course the funny thing was Ricki’s ascertation on the way home that she had had a FANTASTIC time. Go figure…..
PS. Yes, I enjoyed experiencing the unique buoyancy of the Dead Sea.
Posted by rickismom at 12:13 AM

I really admire the way you expose Ricki to new experiences and write about them honestly.
D

Very well written and very true!
Did you know that the Dead sea is competing in the New7Wonders of Nature campaign? You can support it here: http://www.facebook.com/VoteDeadSea

R's fears and perceptions after show her sense of accomplishment of DOING nd not just the fears. She might very well talk differently later-but she did go in the water!