The Amish and the Orthodox: 2 Worlds 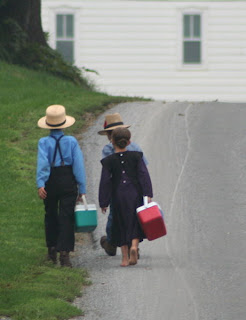 Today I am going completely off on a tangent very far from my normal posts. But I found something interesting, and since my perspective and knowledge on the subject is a bit unique, I decided to pursue it. Hope I don’t lose all my normal readers….(More on losing readers next post…)
If you look here you will find a very dull article (but with some out-of-the-ordinary photos) about what must have been an interesting event: the visit of some Amish people to a Lubavitch (ultra-Orthodox Jewish group) enclave. I immediately sent a copy to my mom. Because my mom’s father came originally from an Amish-Mennonite background. And I am an Orthodox Jew.
The worlds of the OJ (Orthodox Jew) and the A (Amish) are in some ways similar, yet in many ways as different as can be.
My Grandfather used to do business with Jews, speaking Pennsylvania Dutch, as they answered him in Yiddish. (Both languages are dialects of German.) Both groups tend to wear old-fashioned clothing (although this is true only of the chassidic Jews, other OJ wear up-to-date-styles as long as they conform to standards of modesty). Both groups are very family centered, tend to have large families, and have numerous ways of giving self-help and support within the community. Both groups tend to be insular, although the OJ are considerably less so than the Amish. And of course, both groups have a rich spiritual heritage.
But there are a lot of differences as well. The Amish do not use modern appliances, and sometimes not even electrical equipment. (The Mennonite do use electricity.) They tend to end education of their children at an early age, and are a farming society. OJ, on the other hand, are city dwellers in general, and are much more modern. Technology per se is not considered evil, but the modern day secular world’s emphasis on hedonism casts its shadow over the use of some appliances. But many OJ are at the forefront of computer technology, and the OJ family has a kitchen, and a car, as modern as any other.
And while the OJ community in Israel tends to limit secular education to grade school level, the Orthodox community does not put their children to work at an early age. The study our laws and traditions, and the achievement of highly intellectual Talmudic study, continues to the end of high school, and often for several years beyond. With secular studies, care is taken due to the negative influences of society, but here the use of modern technology is helpful, and more opportunities to study secular subjects (when the adult decides to enter the work force) exist today than ever before.
What is most common for these two groups is the fascination and misinterpretation that both groups receive from the outside world. Both groups tend to be either looked down upon, or treated as a joke, without the outside viewer taking the time to look beyond their preconceived assumptions.
And, as a final note, I add that this last statement is also true as regards the world of the intellectually challenged, and the disabled.
Posted by rickismom at 11:03 AM

I moved to Israel after my junior year of college and returned to Philadelphia a year later for college graduation. During my visit some friends and I rented a car and drove a few hours out to Amish country, where we stopped at an Amish-owned wooden-toy shop.

When I told the owner I was from Israel, he looked excited. I expected him to ask me something about the holy places. But what was the first thing out of his mouth?

What kind of land do you have there in Israel? Which crops do you grow, and in which parts of the country?I suspect I learned a lot more from him than the other way around, from his questions alone. He saw the world through the eyes of a farmer, start to finish.