Two years ago Ricki’s aide spent the better part of an hour each week working with Ricki on learning to tie shoelaces. Now, the aide had warned me, at the outset, that she had never “studied” how to teach tying shoelaces (something I found strange for a special-education degree holder), but since I also haven’t, I said “you are just as good as me……” Eventually after about half a year with only partial progress, I told the aide to move on to other pursuits, realizing rather belatedly that her talents could be used better in a different venure. It would seem that the generalized use of Velcro and elastic shoes has weakened the bow-tying ability of even “normal” people. This aide knew only the “special-ed bow” (two loops tied to a knot) rather than the regular method (reef knot). And Ricki was insisting on learning the “real” way (the way she sees me tying). 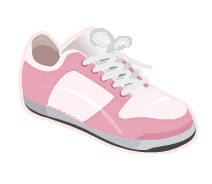 As an aside, a looks-to-me-to-be-good explanation of tying shoes can be found HERE, fifth post down (not the fourth post’s “Ian knot”). [IF I could have given the aide a Hebrew translation of this, perhaps the aide would have faired better, but I considered it “Too hard” to translate.]

And even though I had tucked away the above directions on teaching shoe tying (having seen the original post years ago, and having put it aside for “when I need it”), it was not a pressing issue for me, so I let it go. She doesn’t need really to tie her shoes (there being plenty of Velcro and elastic-laces shoes on the market). I WAS worried that someday Ricki’s nieces would ask her to tie a bow in their dress belt, but not worried enough, it would seem, to make it a priority high enough on my to-do list to actually get done…..
Then yesterday, I was studying the laws of Shabbas (Sabbath) with Ricki, and I wanted to explain to her that shoe tying bows are permitted; knots are not. So I got out an old shoe-lacing toy I had, to show here the difference. She suddenly grabbed the board, and tried to tie the laces. She was being very insistent; I could see that this matters to her. Vey quickly, I realized that her problem was two-fold:
1. She often forgot the first half-knot that the bow has to be placed on
2. She was faltering in the very last step, pulling the loops through. She would let go of the loops while trying to manipulate them. She only needed to be shown how she could push the loop with a finger and only then grab it.
So I reminded Ricki (as she made one attempt after another), to do the first step, and I begged her to let me show her the last step. For ten minutes I begged. Literally ten minutes. And she was continuously trying again and again. [I also realized as I watched her that any previous teaching I had done was not effective as I am left handed, and had never “flipped over” to the other side to show her.]
Finally she gave up on being the “I know everything” lady, and watched a demonstration, twice. She tried, and almost succeeded. I showed her where to push, and she tried again, and succeeded. And she repeated this several times.
“See, Ricki?! Try, try, and in the end you succeed!!
Now this is high on my list of priorities. It is so important to her, that I don’t want her to forget this. I hope to practice often, and plan on davka (“davka” being a Hebrew word meaning “on purpose”, but with “umphhy” emphasis) buying her some tie shoes this year.
Posted by rickismom at 9:01 AM

Jenn is also funny about shoe tying... She does all the steps, but it is all too loose and doesn't hold... AND she won't let anyone help her, show her about tightening or tighten them for her. It is all rather frustrating at the moment! Love her spirit, a little weary of stopping every 10 steps to re-tie shoes... :)

My big sister taught me to tie my shoes when others had failed. I don't know how her method will work for Down syndrome children, or if this is an OK knot for Shabbat, but here's what it is anyway:

A fox and a rabbit (each lace) came to two roots crossed in the wood (cross the laces). The rabbit jumped over the roots and back through the crack to get away (pull one lace over and under)!

Want to see the rabbit? Here's one ear (loop a lace). Walk all the way round it and back through the rabbit hole (loop the other lace around), push through, and there's the other ear! So now you can see the rabbit. Pull it tight!

OK, it's been a long time, but that's essentially what I learned.