Teaching Embroidery- Who Says That’s an “A”? 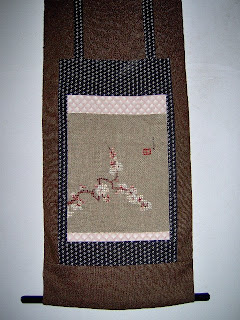 If you ask why I want to teach Ricki embroidery, I will explain that my mother is an excellent embroiderer. Her house is full of varying types of needlework, and not just your typical pieces. Some, for example, are based on Japanese pictures. I also used to embroider (back when I had the time) and I hope that soon I will be able to continue this pastime. When I was a newlywed I embroidered an entire tablecloth for the seder night, full of verses from the Hagada , pictures of grape bunches, and the like. [Unfortunately one year it become wet, and in the midst of the holiday I put it aside. By the week’s end it had mildew that ruined it. To replace it may well be my first embroidery project once I resume stiching.] So embroidery is in the family. But I have much better reasons to encourage Ricki to learn to stich. First, basic embroidery stich on pre-printed canvas webbing is really not very difficult, and it is an activity that is done at all ages. It is a pastime, that once learned, can suit Ricki all her life. It is not considered childish. Secondly, if she becomes reasonably proficient, it can be a potential side employment for her to sew canvases for sale. So I have good reasons to attempt to have Ricki learn simple embroidery, if she shows an aptitude for it, and if she enjoys it. 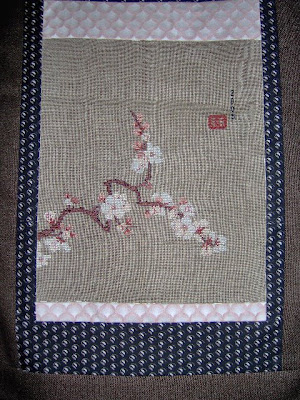 * * *
This week, because my husband was in mourning, people were coming to see him, so the living room had to be kept free. So I called up Ricki’s volunteer embroidery teacher and asked her not to come that week. So a few days later, I sat with her to give her a chance to practice her stitching.
So Ricki did her normal ploy of turning her back and not letting me help her. Now I don’t mind this when she is reasonably good at something. But when she is studying something new, this technique is one that can brew only failure, frustration, and despair.
I pleaded with her to do “together with me” only 5 stitches.
NADA. NO. N’YET. NO WAY!

So I sat Ricki down and told her the story from the Talmud of a man who came from Persia to the sages, asking to be converted to Judaism. The man approached one sage, who started the conversion process by attempting to teach his student the Hebrew alphabet.
He wrote an aleph (letter A) on the paper, and said “See, this is an aleph.”
“Who says that this is an ‘aleph’?” queried the man.
The sage, rather surprised, decided to ignore the comment, and proceeded with the letter “beis” (B). However, the Persian persisted in his stubbornness: “Who says that is a ‘beis’?” The Rabbi drove him from his house, upset at the student’s lack of (needed) respect for his instructor.
The Persian went to a different scholar, and the process was repeated.
“Who says that’s an ‘aleph’ ? Who says that’s a ‘beis’ ?”
The second sage grasped the man’s earlobe, and gave it a tug.
“Ai!! Ouch! My ear!!”
“Who says that this is an ear?”
“Everyone knows that it's an ear!”
“And ‘everyone’ knows that THIS is an ‘aleph’ !”

As I explained to Ricki, after the story, “everyone” knows certain things. But if you don’t happen to know it, if you have never studied it, you need to go to someone who can teach you. You don’t learn new things if you pretend to know things that you haven’t had a chance to learn yet.
Later she sat down and agreed to do some stitching with me. And she picked it up very quickly so far. But I think that the “Who says it’s an aleph?” story will be used again by me. It is a perfect example of the person who did not want to accept teaching.
Posted by rickismom at 7:13 AM

I shall have to remember this. Too often people (including my college students) think that if it isn't blindingly obvious from the first attempt how to do something well, either it's too hard or they're too dumb. But nobody's born knowing how to embroider, or program.