(PS, if you reached this post by someone's side-bar, know that I have a previous post today as well.....) 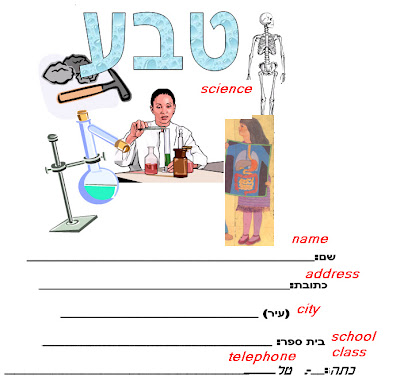 One of the most important skills your child needs to learn is to be able to say his name,address and phone number. And eventually, you want to be able to have him write it.
First, there is the need for a lot of ROUTE pracctice, starting with name, than address. Puppets can make this more fun.
We found learning the telephone number easier by doing it slowly, starting with the first three digits, and each week (or few days), adding on an additional number. One of Rick's older brothwers took this task on out of the blue several years ago.

Last time I went to visit the local government offices, and had to fill out papers, I realized that someday Ricki would to. I took extra copies of the more common forms, and had her fill some out (so far with help).
At this time I started adding a place to write Ricki's phone no., address, etc. to many extra things of hers, most specifically to school workbooks. (I did both on the cover AND the title page, getting double practice with each one. I have posted a picture of the cover/title page of her science booklet abouve, adding in RED the English translation. I found at first that writing the phone number was difficult for her, so I did a bit of extra support there:

Eventually I was able to phase out the rectangles, but I still need to put a line to separate the two-digit area code from the rest, and a line of highlighter on the are she expected to write on helps her keep her writting smaller.
Posted by rickismom at 11:01 AM

My comment here is actually about your blog about the swine flu.

While you may not agree with this blogger about a lot of other things, I think her information about the swine flu may help to dispell some of the fear-mongering that is going around.

When my children were little (all adults now, thank goodness!), I had bought a tape (that tells you how long ago it was) and there was a song that had a space in it for a telephone number. Because so many children do well with music, it was far easier for my kids to learn their phone number when they could sing it rather than just reciting it.

Maybe Ricki has a piece of music or a song that she likes and that you could change the words to so she could recite her phone number or her address to help with the learning process, if she still needs the practice.

Cindy, Thanks for the link and the comments. The singing idea is not bad, although I suspect it wouldn't help the child in an emergency situation (he's not going to sing when upset...) Thank G-d, Ricki knows her phone number, but I am still repracticing it with her on occaision, as I have had times before this that she "Knew" her phone number and afterwards forgot it. So we are working on being sure that it gets into her long-term memory....

Trish @ Another Piece of the Puzzle said...

We've got the basic phone number, although he doesn't understand about the area code. We still need to work on the address.

I really like your point about needing to be able to fill out forms as well. Thanks!