There is a lot of accusations flying around about the video showing the Arab youth bleeding while passer-by curse him.  First, let it be clear that the youth is alive.
I saw the video, and yes it appears at first glance to be shocking. HOWEVER let us look at the simple truth:

Every culture has people who get excited and curse during conflict.Yes, there is someone cursing him. That someone is being kept away from the youth by the police.

But the way our societies view these hotheads is VERY different: 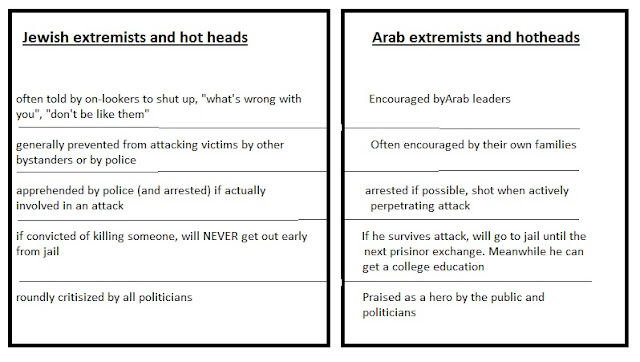 I would add that if a Jewish extremist were actively involved in a terror attack, and would not stop, he would also be shot by responding police or soldiers.

And yes, the ambulance passed the Arab in the video. Does he really deserve to be treated BEFORE his victims?!???!???!  Eventually he was taken to the hospital, where he receives the same care as any Jewish patient. (Although he IS handcuffed, so that he can not carry out any further attempts to hurt others.)  [And he is in better condition than his victim..........]
Posted by Rickismom at 3:39 PM