On Terror, Life, and Prudence

Yesterday (Wednesday)  a terrorist stabbed a man at the bus stop (in Petach Tikva)next to a mall that I occasionally go to. Also buses in Jaffa got stoned (I travel by bus on that street to go to Rina's grave, and often I walk in Jaffa).  (And as I write this, I hear of another attack, noontime today (Thursday). A yeshiva student is stabbed in Jerusalem. I pray that it is not my grandson. Or a friend of his.  Or the son of a friend of mine.)
While I always know in theory that terror can happen anywhere, and that no one is guaranteed immunity, the sheer number of attacks yesterday (and this week), along with the proximity of the attack in Petach Tikva, drove home the gut-wrenching realization of “There, but for the grace of G-d, goes I”.  Just two days before I had called my “ultra-Orthodox” son and daughter-in-law in Jerusalem, who do not listen to radio news, to be sure that they aware of the escalating violence and atmosphere.  Luckily, the word-of-mouth-news  network works quite well in their neighborhood, and they knew of the need to be extra vigilant when outside.
Later on Wednesday, my husband informed me that I need to be more careful when out “walking”.  Knowing that any belittling of the danger would only increase his anxiety, I agreed with him. But, realistically, I thought to myself, I am much more likely to be hit by a SMS-messaging car driver than to be killed by a terrorist.
Yet, despite the clear calculation just mentioned, I was much more alert on my walk to and from the swimming pool last night.  It was not a disabling fear, but an extra awareness of my surroundings.  “Why,” I wondered to myself, “am I apparently more afraid of the miniscule risk of terror, than the possibility of a car accident, or of having a heart attack in the pool, both of which are statistically much more likely to occur?”
The answer, I believe, is that with accidents and health concerns, we feel that at least to a certain extent, that we can take precautions.  If we eat healthy, exercise regularly, don’t text-and-drive, and cross the street carefully, we have a fairly decent chance of reaching 80 or 90. With terror (whether in Israel or elsewhere) we are much less in control. Yes, there are things we can do as a country perhaps to decrease these incidents, but when a fanatical or deranged individual goes on the rampage,  only chance, or by G-d’s grace, are we not among  the victims. Realizing that vulnerability can be quite unsettling.
Then today, a friend sent me this link:  This is a Ted-Talk about a dance group of “senior citizens” the “Hip Op-eration Crew”( and the philosophy behind it). The organizer was asked (seriously!) “What if one of them dies (ie. dancing, or on the plane)?”   And the response of the organizer (“Well, what if they did?”)was correct. After all, if we let fear of dying stop us from living, what worth is living then?
Yes, as countries we need to work on security, mental health, and combat terrorism.
But as individuals, in our private lives, the reaction can only be one:
MAKE TODAY COUNT. We don’t know-ever- how long we have to remain on this globe. 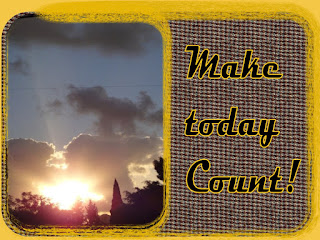 [As religious believers, we can try and “curry favor” with G-d, by doing good deeds. These activities may perhaps affect things in a spiritual sphere. But we should not kid ourselves that those deeds will guarantee our safety. Sometimes G-d feels the best thing   for us is to experience suffering.]

Posted by Rickismom at 2:06 PM