A Walk in Jerusalem

Note : The pictures here where not taken yesterday. I do not use a camera on the Sabbath!
I spent shabbas this week in Jeruslem, at my son's house. Early Friday evening, eager to get a bit of walking "in", I stepped out of his house into the crisp Jerusalem air. Living as I do on the humid coastal plain, I love the cool crispness of Jerusalem's evening. The setting sun cast a amber-ish glow on the buildings, which themselves are all made of beige-colored Jerusalem stone. The streets were quiet as the area I was walking in was largely religious, and cars are not used on the Sabbath (except in health/safety emergencies).

Then in the morning I rose early to walk to the Kosel (Western Wall, Judaism's holiest site), about an hour's walk away from where I was staying. The early morning streets had few occupants, but slowly became more populated as the minutes passed, with early risers going to synagogue for prayers. As I neared the old city, I saw more tourists, and more Arabs, being nearer to the Arab side of the city.
I entered the old walled city by way of Jaffa gate, and walked around the Armenian quarter to reach the Jewish quadrant.

[Picture (from Wikipedia): David's citadel, and the walls between the citadel going towards Zion gate. I walked just inside of these walls (the citadel s close to Jaffa gate)]

When I reached near Zion gate and passed it, I could see the massive graveyard that is on the Mount of Olives spread out before me, beyond the far side of the ancient walled city.
[Picture: Ricki, nearly two years ago, in this same area, with the Mount of Olives in the distance.] 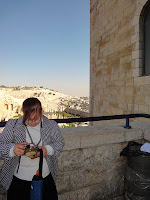 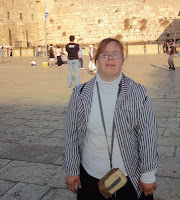 The Kosel plaza was cool, still being in shade. People were praying quietly. One woman was walking between the worshipers (on the women's side), offering wiffs of scent-filled plants.
[Photo, Ricki nearly 2 years ago, at the Kosel plaza.]

After finishing my prayers I returned to Jaffa gate through the old city (rather than along it's borders). At 8:30 some of the Arab merchants were already opening their stores to catch early morning tourists.
Then I walked up Yaffo (Jaffa) street, which is closed to all traffic (except for a streetcar which does not operate on the Sabbath. On reaching Davidka square, I turned right to walk through the Geulah section and down to the Sanhedria area. The city was rapidly awakening, and the sun shone brightly in the strikingly blue sky.

Posted by Rickismom at 4:34 AM

Have a shavua tov.
Lovely post.
I see that Ricki is always with you...

This was beautiful. I am a born again Christian and have always wanted to visit Jerusalem. Thank you for this 'tour' of the city.

(And for the pictures of Ricki!)

thank you for your blog on the walk in Jerusalem; lovely; my greatest condolences on your loss of Ricki; please find a way to celebrate her birthday next week with joy and hope (Happiness, Optimism, Patience and Enthusiasm);thank you for sharing your joy and tribulations of your time with her.
Blessings
Skeeter28