The On-Going Saga of the Borekas (and Soft Drink and …..) Bandit

Ever since we started the “Borekas Campaign” my husband and I have been watching Ricki like hawks. When she leaves for school, and on her return, which are primetimes that the local grocery could be assailed, we try and keep an eye watching, to prevent any stealing on her part. The canmpaign will only work if it is the ONLY way to get borekas.
So Wednesday afternoon, my husband sat at the window, waiting to see if Ricki would come straight upstairs after exiting the taxi which brings her home from school. But she didn’t arrive by taxi. We called the taxi service, and they said that Ricki had refused to enter the car, and that her teacher had acquiesced, saying that I trusted Ricki to walk home alone.
Well, I DID allow her to walk home alone if she didn’t want to go to the afternoon activity center. But now (see yesterday’s post) that she is not going to the center at all, there is no reason for her to come home by foot. 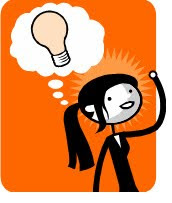 (image: girl with “bright idea” lightbulb over her head….)
I realized VRY quickly that there WAS a reason, and the reason was that she knew that Dad would be watching her leave the car. [My G-d, where do those brain cells she uses to get borekas go when she is studying math?????] She arrived soon after, a few crumbs on her lips. But the grocery is closed at that hour. (They are open just until after she would arrive by taxi. If she comes by foot, she arrives too late for our grocery store.) So where did she get the “goods”? She was not telling. (“I dunno….”)
So later that day I took Ricki with me, and after running an errand, I took the bus to the stop next to the school. And we walked home together. And slowly (under threats of being computer-free for a month), Ricki told me what she had stolen (on her various walks home) from each food outlet, grocery store, and bakery on the way. The list was at least 5 items long, but at least all the store owners (except one*) cooperated nicely with us as we confessed and paid.
Ricki claims that she is finished with stealing. I told her she will take the taxi home in the future; one’s evil inclination has a tendency to gain the upper hand…..

I like that you are educating the general public along with Rikki. . .

Isn't it amazing how smart our kids are? So creative, so determined.