The “Broken Record”- Solutions (and a surprise addition at the end.....) 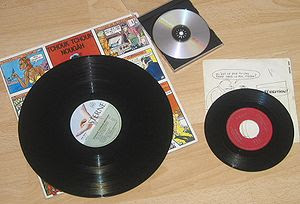 I assume that nearly all of my readers are old enough to remember regular phonograph “records”. My Dad had an extensive collection of records, almost all of it classical music. I remember a series of records produced by a musical Heritage society, which were very good, including one of Renaissance Dances. We were forbidden to touch them, until we had learned carefully the correct way to put the needle on the turning disc. This was to avoid scratches on the grooves.
Of course, the most serious scratch was one which would cause the needle to move back to the previous groove, resulting in a phrase being repeated continuously, ad infinitum..... The resulting defect was like Chinese torture to the listener.
Ricki, bless her, has her own version of this “repeating” torture. Her disc may be fine, but how many times can one listen to the same tape/ movie without going slightly crazy? This is especially true when the tape is very childish. [I once remember a psychiatric patient in the hospital I trained at, who played a hard rock song “I want to get out of this place” continuously, driving the staff crazy. I volunteered to work with her, and became somewhat addicted to the song myself, for a while. It would be fascinating to figure out why some people can hear a song again and again, loving it, while others are disturbed by the constant repetitions.] I suspect that one of the reasons Ricki can hear her tape or CD time after time is because she dances as she listens, and the dancing changes from session to session.
If you have this problem with your special needs teen, or pre-teen, I suggest earphones. It works like a charm. Except that Ricki can’t dance when using earphones. I am even thinking of getting Ricki an MP3 player, and transferring her favorite music to that, so that she can listen and dance without the rest of us hearing.....
* * * * * *
Of course, sometimes I wonder how G-d can stand OUR broken record every Yom Kippur:
“I won’t get angry at the kids
I will talk nicely with the neighbor...
I will call my Mother-in-law more often....
I will keep my diet....” ETC ETC.
An easy fast (to my Jewish readers), and a profitable repentance as well. (To me too....)
Posted by rickismom at 11:59 AM

Email ThisBlogThis!Share to TwitterShare to FacebookShare to Pinterest
Labels: Down syndome, Yom Kippur

mp3 player is a great idea--my older daughter practices irish dancing with one--which is a lot of motion and it never skips... and it looks so 'cool' among peers.