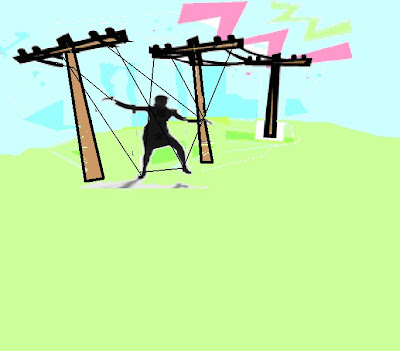 Today I felt like a marionette, being pulled this way and that by…. Electricity… or the lack of said item. For quite a while (months), the safety switch in our electric box has been shutting off our electricity with what seemed to be impunity.
This safety switch, designed to prevent serious electric shocks, will automatically switch off the power to the entire household when any breakage of normal circuit occurs. If this happens when you are plugging in or starting use of an appliance, it generally is a good sign that said appliance is KAPUT….. So you unplug the offending item, flip up the safety switch, and return to regular living. (If it is a major appliance, especially a refrigerator/freezer, there is of course a scramble to get it fixed….).
But then there are those frustrating occasions that the power shuts off without there being an easily identifiable culprit. So then you have to unplug each appliance in turn, until you finally can figure out which electric-run item is wrecking havoc on your otherwise well-planned day. Since my house is chock full of electric gadgets (some of which are aging appreciably), and reaching the plugs of several of my major appliances involves standing on chairs and yanking pretty forcefully, this all can be quite time-consuming.
But for the last few months, the safety switch has been rather capricious, turning off our power at whim. No offending item could be identified, each time it seemed that a completely different item was causing the short circuit… and the item whose removal from the socket would allow the switch to go up would often run without trouble a few minutes later…… We tried several times to “fix” the problem, and it finally stopped… only to return with a vengeance this morning.
This morning, after accompanying my husband to the health fund, and running to the post office, I returned home at n10 o’clock, ready for breakfast. I was ready… but the fridge wasn’t. The electricity had gone off, and I set about trying again to determine what was causing the shortage. After disconnecting each and every appliance, one by one, I gave up. I finally called an electrician. But he said “Before I come, save yourself some money. Unplug EVERYTHING and THEN try to flip the switch up. Then as you re-plug in the items, you are likely to find your problem.” I thanked him, and putting an asterisk by his name in the phone book, I followed his advice. [Only unplugging everything was not that simple, as my daughter’s room on the roof has a few nearly inaccessible sockets.] When I tried to re-plug the fridge in, the power went off. But maybe it was simply the extension cord? (Our refrigerator came, for some reason, with a cord that won’t reach high enough to the socket located next to it.) So I pulled the fridge out of its corner, to a lower socket, and plugged it in sans the old extension line. It ran OK, so I quickly scrambled out to buy a new extension cord. I returned, plugged the new extension into the regular socket, and POOF the current shut off again. Deciding that cold food being a priority, I returned the refrigerator to the plug in the hall, waiting for my son in law (who IS an electrician, but was away at work) to arrive in the evening. But then, when I went to make lunch the use of two other appliances AGAIN cause the power to fail. Obviously, this was getting complicated…
Finally this evening my SIL figured out what was wrong, did a temporary fix, and will buy the parts needed for a full repair tomorrow. But all in all, much of my well-planned day flew out the window. But since it WAS 9/11, I have to keep it all in perspective, don’t I?
Posted by rickismom at 12:24 AM

So, what was finally the problem? An appliance? :) Glad it's on it's way to being fixed!

ahh, perspective
We're usually a bit off on that. Stay healthy, nu?