During the festival of Sukkot (Tabernacles), we eat for the entire week in a “sukkah” (see HERE if unfamiliar with this).
[image: our sukkah] 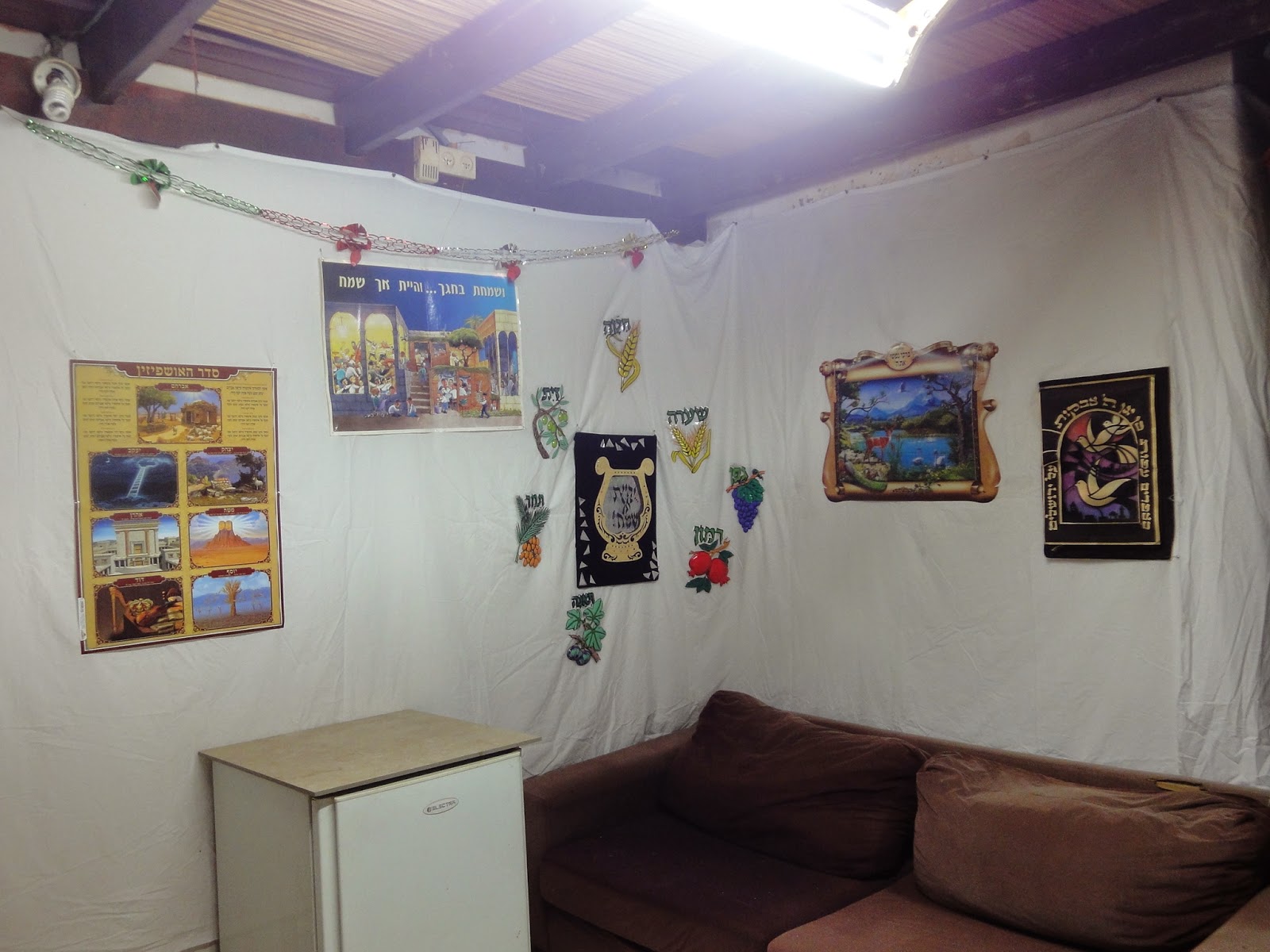 Although I had no guests expected for the first day of the holiday (there might be a blog on this later….), for Shabbat (the Sabbath) I was expecting our son and his large family to come spend the day and a half here. So at noon on Wednesday I decided to set up one table, planning to open my second folding table on Friday. One table is in good condition, the second is getting old, and I knew that it was on its “last legs”. I decided to open the second one… and I am glad that I did, as it promptly broke. “Broke” as in: “died”, “croaked”, “kaput” and “terminally finished”.  It was 12:30. Stores were closing, and would not reopen that day , or on Friday.
Sizing up the specter of everyone partaking the Shabbat meals without benefit of a table, I grabbed my purse and dashed out the door. The first two stores I tried had no folding tables left, with trepidation I headed over to the third (and last) hardware store in the area. It happens to be my favorite; the manager there is both honest and helpful.  He informed me that I was in luck. He had a final table in his storage area, and sent his brother to haul it out for me.
-          “But how in the world will you get it home?”
-          “I’ll carry it. I only live three blocks away.”
-          “You don’t have anyone to carry it for you? It IS pretty heavy….”
-          “If necessary, I’ll take a taxi.”
Well, the second I lifted it, I realized that a taxi was definitely in order.  I turned around , heading away from home, and towards the taxi, when an eighteen year old asked “Hey, do you need help with that lady?”
-“Oh, I think I will need a taxi.”
-“A TAXI? In this traffic jam??”, as he gestured towards the street. “Which direction do you live?”
-“I live three blocks away, THAT way.”
-“I’ll take it for you.”
I agreed, after ascertaining that he would let me pay him, although he refused to take more than a Taxi (in non-traffic jam situations) would. In addition he lugged it up the three floors to my apartment, as well as the additional flight to my roof.  I offered him a cool drink and suddenly he said “I know you from somewhere.  Do you maybe know my mother, H___?”


Yes, I do. And he is just a “chip off the old block”. She is also the active, impulsive type, eager to help anyone that she can. (After he left I gave her a quick call just to let her know how fantastic a teen she has…….)

PS. By the way, HE could walk faster WITH the table than I could WITHOUT it. He kept telling me I didn't have to try so hard to keep up. (I was carrying his bags for him, so I was not concerned that he was going to take off with it.)  Women, men are a different species....
Posted by Rickismom at 8:12 PM

Moadim Lesimcha, Ruth. This is a great story! You should send it in to the Partners in Kindness Daily Dose of Kindness. http://www.partnersinkindness.org/about_us.html

This post is included in  the Shiloh Musings: After the Chaggim (Holidays) Havel Havelim, 5775.

Please read the other posts, too and share all, thanks.