(Note for non-Jewish readers: "Yartzeit" is the Yiddish term for  the yearly anniversary of a death.)
[image: a colorful stone "mosaic", heart-shaped.] 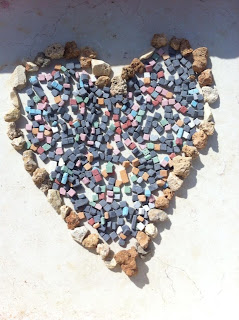 Ricki's yartzeit (which goes by the Jewish calendar), was on Saturday, the 27th of July.  I had expressly planned the timing of our trip to the USA in order that we return before that date, arriving here on the 23rd. Also my dear sister-in-law would be visiting then from Brazil, so we had two reasons to be back that week.
So on our return, in addition to unpacking, cleaning up the mess the house had gotten into (there had been others in the house during our absence), I had to spend some time with my sister –in-law, which was a pleasure. I also needed to organize the family gathering at Ricki's grave for either Friday the 26th, or Sunday the 28th. In the end, the married children all opted for coming on Friday, and staying over for Shabbat  (Saturday) at our house. And since I was just after a trip, THEY did (and brought) 70% of the cooking. [One of my daughters-in-law baked such an ENORMOUS amount  of challot (bread) that we froze the leftovers, and my husband and I have been eating then on the Sabbath up until and through this last week.]
That Friday I prepared (my share) of things early, so as to be able to have the time to go to Ricki's grave in the afternoon. Finally, a bit on the late side, Ricki's siblings arrived, and we drove over to the graveyard. It was rather late, and vehicular access to the graveyard was closed. My husband cannot walk the distance to her grave, however, and after a bit of arm turning and name-dropping, my sons managed to get the guard to let one of our cars in. Meanwhile, while they were doing this, I had walked over to the grave, and had some quiet time there. I even managed to rearrange the stones on her grave (left from the last "mosaic")* into a heart. We then held a small service, and rushed back home to finish our final preparations for the Sabbath.
The Sabbath, with several of Ricki's siblings together, was extremely nice. They enjoyed the time together. In addition, the grandchildren had an extended time together, a rare opportunity. On Saturday, during the main meal, we spent some time reminiscing about Ricki, and even a few of the older grandchildren joined us in this. (Although I was amused that the grandchildren who used to fight with her a lot, also drew her in rosy colors….). We already have noted that Ricki's yartzeit next year again falls on the weekend, and plan to do this again…….
The only downside was that the youngest sibling (Y) who would have been able to come (ie, excluding those in America) had to be in the army that weekend. [So he planned to visit her grave on the secular date of her passing a few weeks later, although that date turned out to be rather hectic, and I'm not sure he managed it. I think he went  a week later, but I didn't ask him, as I don't want him to feel guilty if he didn't manage.]
I also add, tongue in cheek, that it's too bad Ricki missed that shabbas. She would have loved it….

*BTW, these "mosaics" are NOT a Jewish tradition. The tradition is to put regular pepples on a grave. The "mosaics" are my " mesugas" ("craziness").
Posted by Rickismom at 8:52 AM

HaMakom yenachem...
My hat blew away when I was on my way to visit you. Kapora
When you feel that the niftar would have loved to be with you, then you're remembering her just perfectly.

She is looking down on you from Heaven and smiling into your heart.