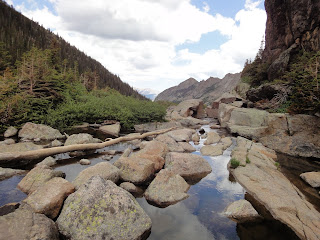 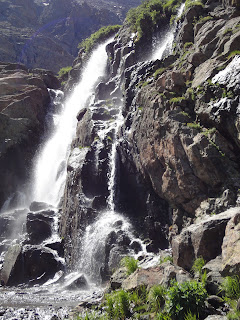 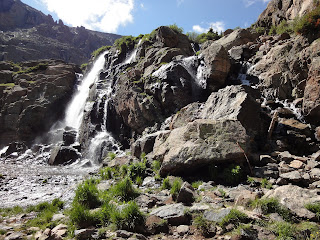 I quickly ascertained that I did not feel comfortable nor safe doing this section of the hike, and elected to sit for a while at Timberline falls, while my brother and sister-in-law continued on to Sky Pond. Maybe I could have done it, but my fear of getting stuck in the middle, or worse yet, on the way back--- there is a very steep rock at one point along the side of the falls---- made me question the wisdom of doing it. Even if my older brother can. Even if nearly everyone else arriving at the falls did it. And I won't say that I didn't feel a bit bad about it. However, we need to be able to recognize our limits. We need to be able to trust our inner voice. We need to be able to say "I am not doing this", even when everyone else is.
Posted by Rickismom at 2:06 AM

Rickismom - I think you were very wise to listen to your inner voice, even when everyone else was going on. I think I would have done the same. Thank you for sharing your pictures. What a beautiful place!