It was Saturday evening. My son Josh and his family had been with us for the Sabbath, and would soon be heading home. But before leaving, he sat his girls down next to my computer, in order to show them an "album" of pictures I had prepared of Ricki. After all, his young daughters only knew Ricki in the last few years. They had never seen earlier photos of her.
Suddenly from the kitchen (where I was washing dishes that had piled up over the weekend), I heard Josh give a big chuckle in the other room. "Mom," he called me, "You just HAVE to come here and see this!" 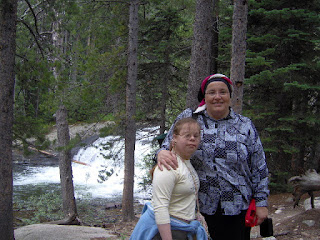 Nothing like a photo, to tell us where we've come from, and who we've become. :-)

And where we do not want to return to but inly in our memories. I of course am talking about our past obese selves.

I had the same reaction! I didn't know you then, but I know you look great now! The difference really is amazing. You know you're the same person, but to others it can look like different people.

Sweet. :-) I don't think I've ever seen a photo of Rikki, or of you for that matter. I love pictures, being able to see who we were in the past, wondering how we've changed both physically and emotionally through the passage of time.

pre-diet you were very different