Now it would certainly be an acceptable query to ask "What in the world does weight loss have to do with black eyes?"

So here is the answer:
Saturday night I discovered to my horror that not only had the thingamajig that hold the toilet seat to the ceramic seat broken, but that when the seat had broken previously, I had neglected to buy (as I generally do) a replacement thingamajig ("pin"?) so as to have one available NEXT time as well. AND I was expecting a daughter in law for the holiday (sundown Sunday to sundown Monday)…..so buying a pin PRONTO was clearly mandatory.
So although I knew I would not be able to purchase one nearby, hardware stores in our town being closed for the holidays, this was not really a problem. I wanted to get an hour walk in on Sunday, before the holiday, so I would make the half hour walk to the big shopping area just outside our town at a good aerobic clip, and back and forth would give me my hour of exercise. So I set out…..
As I neared the store, I suddenly found myself face down against the sidewalk, having tripped over something, although I could not identify WHAT. Someone from a passing car (that stopped) answered my "I'm OK" with  a pointed observation that my face was bleeding. I had a gash, and they graciously gave me water to wash up with, and a tissue to use to apply pressure. I checked the wound in their side-view mirrors, and determined that I could survive without further treatment for an hour. So I completed my quick shopping spree (checking for bleeding every few minutes), and on the way home stopped in at a quick mini medical service ("TEREM"). They glued the gash together, but the doctor warned me that I would have a black eye as a result. And yes, by that evening I definitely had one, which grew over the next two days to this: 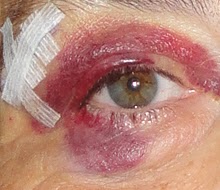 So WHAT (you may still be wondering, does this have to do with weight loss? Because two weeks ago I ALSO fell, as well as a few days ago (although I managed to escape that second fall with no more than some bruising to my shoulder and knee). And every time I was wearing the SAME skirt. The same bit-too-loose skirt that needed repeated hitching up. So since I have NOT fallen while wearing other skirts, I am NOT running to a neurologist, but am finally chucking out the old skirt.
So treat yourself to new clothes as you lose, rather than opting for a black eye (or two or more).
Posted by Rickismom at 5:00 PM

Oh goodness I am laughing aloud - sounds SO much like something I'd do - by the way - that is an impressive black eye - if you are gonna have one - have an impressive one!

Ouch! Looks so painful! It's good news though, that it's because of your loose clothes due to weight loss! Congratulations?? :)

Nu, so is it dangerous to lose weight? It sure is expensive. I'm still trying to find the budget to replace clothes...
refuah shleimah

Batya, it may be expensive for you, but for someone like me, I am SAVING money, because large-size clothing are VERY expensive