Getting Her Identity Card 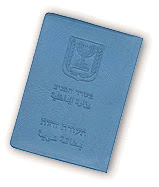 The first step in tackling Ricki’s army deferment was to obtain an identity card for her. All Israelis have one (except children, who are listed on their parents’ card). I had actually filled out an application form with Ricki once, simply to give her experience in working through official papers. But she had been too young then to actually obtain her identity card. But now we DID need one, and so one day last week I set about obtaining the document for her.
First I printed out from the internet the needed form, and then went to Ricki’s school to take her to the nearby “Internal Affairs” office to make the formal request. It was one of Ricki’s first days at school after her “strike” and I prayed that she would readily acquiesce to the “outing”. She didn’t.   It was windy outside when I arrived, and Ricki’s class had at that moment “break time”.  I explained that the government office was nearby to no avail. So I informed her that I would wait (in the teacher’s chair) until she agreed to accompany me. I sat down and gazed at the ceiling, hoping that the lack of negative attention would work better than hounding her. After five more minutes of unsuccessful waiting, I informed Ricki that I was going to tell the principal.
The principal rallied to the cause, and managed to get Ricki outside of the building. But when Ricki felt the wind, she turned to reenter the school. However the principal, thankfully still there, informed Ricki that she would lock the door to the school, and wouldn’t it be warmer to go with your mom than sit outside? So Ricki reluctantly joined me, only to be pleasantly surprised by the brevity of the walk to the office.
We reached the office (on the way we took the needed ID photographs), and took a number for our turn. It looked like we had at least a  half-hour wait ahead of us, and I regretted the half hour or more that I had already lost at the school. So we sat down near the front, opposite one of the clerks. When the clerk next had an opening, she signaled for us to come to her counter. The person who must have been in line complained that there IS a line (quite rightly, actually). But the clerk said “Some things are out of line.” She was obviously giving us preference due to Ricki’s  disability, and for once I went along. (I hope the person who was in line forgives us; I hope they never have the exasperating experience of dragging a 85 kilo teen with Down syndrome somewhere that she doesn’t want to go….).
As we left the office, Ricki with ID in hand, I informed her that I needed the ID (to get certain papers for her deferment). Ricki started to refuse, but I had come prepared. I fished out the new shinny health fund card that I had obtained for her a few days before, as well as the extra unneeded copies of her new ID photo. She agreed to the swap, and enjoyed the walk back to her school.
Posted by rickismom at 6:00 AM

Email ThisBlogThis!Share to TwitterShare to FacebookShare to Pinterest
Labels: Israel

You should be running a support group! You're fantastic in how you handle all this.

in the vanguard said...

May I suggest you stop using the label "Downs Syndrome", despite the doctor's name that first described it, and use, if you must, "trisomy 21", or, and much better yet, as I do, "Up Syndrome" - because, as only you may well know, these children are the light in our lives, and hardly qualify to be tagged with so disparaging a name such as "Down", in describing them.

The tern "Down syndrome" is a commonly used one, and as you know, is due to the doctor's name, not "down" (as versus "up"). "Trisomy 21 " would also be good, accept that many people who do not have connection to it would have no idea what I am talking about....