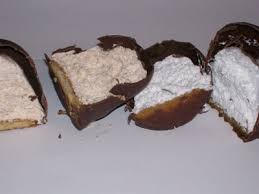 I was doing some grocery shopping for the upcoming holidays when I noticed the typical cardboard cartons that herald the coming of fall in Israel: carton of Cream-Bo treats.[I havewritten a post about these confections before, including a definition.]

I personally thought, considering the heat outside, that it is a bit early in the year for cream-bos, however, I was sure that my grandchildren would have no scruples about eating some during the upcoming sukkah holiday, and I bought a box. But I was sure to purchase the mocha flavor, it being a bit less sweet than the more prevent white vanilla ones.
Later that evening when the delivery from the supermarket arrived, soldier-son "Y" happened to be home, and was opening the boxes for me. When he opened the delivery box containing the carton of cream-bos his eyes lit up…. And he quickly stuffed the entire box in the freezer--- we believing, in our family, that cream-bos are tastier frozen. (As he was doing this I thought to myself "So much for having any left in two weeks for the holidays….." ) Friday both he and my husband sampled one each, but I decided that  since they are a really empty 115 calories, I would wait until Saturday night, after the Yom-Kippur fast, when I would have plenty of calories to "spare".


So a few hours after the fast (having first ingested much healthier things like vegetable soup), I decided that a cream-bo treat was in order. After two bites I told my son—"I'm sorry, but I just can't finish it. I don't like it. It is TOO sweet." No more cream-bos for me. That easy. That simple. My tastes have changed. I have gone from liking cream-bos, to preferring salads (see  above referral to previous post), to not being able to finish one. Even after a fast day.
Posted by Rickismom at 12:26 AM

Rickismom - good for you! I have found that after being on a low-sugar way of eating for so long, I can no longer eat candy and/or sweet treats.

We are on the right track! Liz

I remember Krembo's from my childhood -- they were ginormous treats of deliciousness!!! A few years ago I realized that our local kosher grocery carries them, and I got a package for my hubby. They looked so tiny compared to what I remembered. And I know I am much pickier about my sweets than I used to be. I have refused to even try them, on principal. I want to keep the memory sweet!

That's good. You tried them and got them out of your system of "yetzer haraa." I never developed a yearning for them, B"H, but have too many other things that tempt me.

I can still eat Creambos but I don't enjoy them as much as I used to. (I'm an on-and-off dieter.)

How are your people in Colorado?

Great idea! I'm putting it on the list. Lots of kids going to be here for Succos. Just for the record, I've never liked Krembos. They ARE too sweet and chemical tasting.

Baruch HaShem my mom is fine-- although the creek by her house became a river. But her house is well uphill, thank G-d.